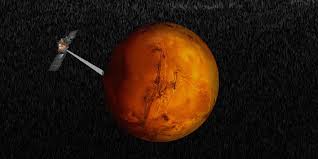 In 2018, researchers found that there exists a water lake that id deep on Mars. This was found under its ice caps in South Pole.

The USC AWARE researchers have now come out with a study which shows an active existence of deep groundwater on Mars. They say it could be originating from streams on surface in areas near equator on Mars. The USC researchers have found that this groundwater exists in geographical area that is broader than the poles on the Red Planet.  They determine there is a system that is very active and it would be 750 meters deep from which the groundwater reaches the surface by way of cracks in specific craters.

MARSIS member Heggy studied the features of recurring slope Linea on Mars, which is similar to small, dry water streams that are visible on the walls of craters on Mars. Heggy added that scientists had earlier thought that these features are associated with the water flow of surface or close water flow of subsurface. He said that they think this is not true and that they present another hypothesis that these begin from a groundwater source that is deep and that this reaches the surface upward moving along the cracks on ground. Co-author Abotalib Z. Abotalib said that the experience that they got from their desert hydrology research was the stepping stones in getting this conclusion. He added that they have seen similar things in the Arabian Peninsula and the Sahara of North Africa. It helped them explore the similar method on Mars.

Both the scientists formed a conclusion that the fractures within the Mars craters have caused the springs of water to reach the surface due to deep pressure. The springs have leaked on the surface and this has generated sharp linear features on the crater walls.