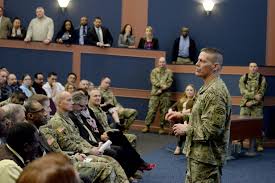 In a conversation held recently with one senior defense officer regarding changes developing in military space, the official explained that if the currently proposed reorganization instructions are followed and implemented, the lines of command could potentially become quite blurry. According to him, while he had previously had only one person who ran everything, now he will have four or more.

If the proposed reorganization is implemented, the U.S Command will be at the helm of the JFSCC function. This means that the job roles of the Space Command of the Air Force would be channeled into the hands of military service, that is, the Space Force. Subsequently, there would be one civilian leader, who would work as a space undersecretary reporting to the Air Force secretary, followed by a four-star staff chief and finally, a chief of staff at the vice rank.

The new structure has the potential to lend a higher stature to space because the chief of staff can be expected to be a Joint Chiefs of Staff committee’s member, thereby helping Space Force to rub shoulders with the top authorities in the game.

However, as the saying goes, “too many cooks spoil the broth”. The existence of a large number of people in powerful positions when it comes to calling the shots in space matters, can potentially create ambiguity as to who gets to have the final say on matters of importance. Ironically, the very genesis of the Space Force was to find a solution to a problem that had been brought to the fore by Congress and the White House that no singular individual or agency can be held responsible for decisions regarding space.