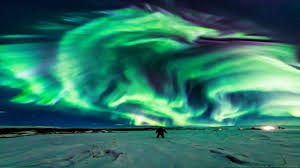 Another green dragon is seen at the sky over Iceland. It seems that sun has again released an army of charged participles in earth’s atmosphere. This is a real fire breathing space object, much like the imaginary dragon people assume. The fire ball made its first appearance in the beginning of February.

As per scientists the prime cause of the ‘hissing dragon’ is sudden twist and outburst of the magnetic fields of the sun. This leads to the sunspots. Now particles gush out of the spots and create these fire glowing dragons. Along with these particles, the oxygen and nitrogen present in the earth’s atmosphere create the sparks and the lights.

While these bright outbursts of particles have been seen earlier over the sky of Iceland, this time the aurora appeared at an unusual time. According to the NASA picture editors, they did not find any sunspot on the sky this February, so the sudden particle outbursts were quite unexpected.

NASA photographers Wang Zheng and Jingyi Zhang expressed their surprise over this sudden appearance. The supernatural creature or the evil queen Maleficent’s dragon (character from the fairytale Sleeping Beauty) surprised even Zhang’s mother. She came out of the house along with the photographers and ended up being in the foreground of the picture!

Surprising news is, besides the dragon the photographers also detected a phoenix in the sky. The dragon photograph is a combination of bright and stunning colors. This photograph has been considered as the ‘Photograph of the day’ at NASA. Zhang snapped the picture on February 6, 2019. This swirl of green light at the snow- white background of Iceland has been viral on the internet.