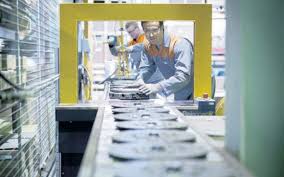 The manufacturing sector in the United Kingdom has registered the lowest PMI reading in the past seven years and has therefore lead to the posting of a massive red flag for the economy of the nation. The figure for PMI has hit the figure of 47.4 which is the lowest figure since the month of July in 2012. The analysts have said that this is happening due to the prevailing uncertainties all across the world and the domestic markets which have been weighing continuously on the poor performance of the manufacturing sector in the United Kingdom for the month of August.

The orders of the products from Britain have also been contracting at the fastest pace in the last seven years. This has signaled the impact the uncertainty in politics along with the Brexit has had on the economy.  Pound has fallen 0.7% against the Dollar and 0.3 as against Euro. Analysts have said that the there is a lot of negativity over the speculations of contraction in the economy before the country leaves EU. Others have said that the state of PMI is shocking because the confidence is unprecedentedly low and there is pessimism amongst manufacturers and pessimism of this level has not been seen ever.

The past week has been impacting the sector the most because of the decision that was taken to suspend the parliament by the prime minister of United Kingdom, Boris Johnson. The move has been undertaken to push the procedures of Brexit through by the end of October.  This action had a negative impact on the currency pound as it fell by 0.7% as against the dollar and 0.6% against the Euro last week.