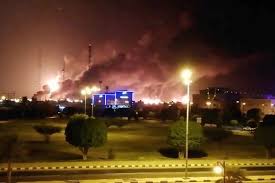 The CEO and Chairman of Marathon Oil, Lee Tillman has said that though the prices of oil might not be spiking in the response to the airstrikes in Iraq on Thursday, the tensions which are going on in the Middle East are going to support the prices of oil being higher as they go forward.

He has attributed this lack of stronger price initially as a reaction to the surging of production in the United States.

He said that this dampening effect is due to the impact of the energy renaissance which has been observed in the United States. He said that the United States were making close to 8% of the supply globally in the present day and that fuel is reliable apart from being extremely secure on which the markets can count on. He further said that he did believe that it has reduced the amount of risk from returning into markets.

Having said that, he argued that the crude prices are going to in all probability end  the year at a higher level as the tensions are in all likelihood going to go on which has created a floor for the pricing of oil and gas.

The comments have come as there was a spike in the prices of oil by over 3% after the airstrike by United States had killed the top commander of Iran Qaseem Soleimani however this enthusiasm saw a decline as the oil settled without much change and on Friday there was a decline in prices of 1%.

Marathon has been focusing on the exploration of oil and gas production and is a player in the shale industry of United States.