Virtual reality is being incorporated in a number of things including entertainment, technology, living world, and so on for making the world a better place to live in. The concept of virtual reality helps experience the environment in a totally different manner. Do you remember the “Holodeck” from the sci-fi movie “Star Trek: The Next Generation”? In the movie, it was a space-age virtual reality platform that helped replicate the environment of any kind and also was used as a recreational arena so as to immerse oneself in nature. 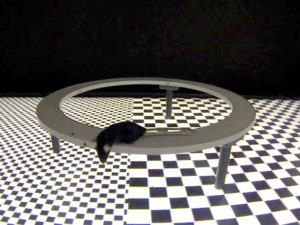 Thus, keeping all this in mind, the researchers have recently developed a virtual reality (VR) milieu for all the freely moving animals so as to create an elusive environment for the lab animals. The new system has been developed to examine the animals’ behavior and perception instead of creating a recreational environment for them. This basic VR system actually appears as a cylindrical space with the walls and the floors covered using flexible computer screens. Once, the animals are placed in the 3D system, their behavior or movements are monitored using cameras and sensors placed in the system.

The system has been named the FreemoVR system and as the name implies, it permits animals to move around freely within the arena. The visual imagery can be adjusted using the specially designed software and also add in elements so as to monitor the animals in real time. The animals get in all the mechanosensory feedback while they are moving around freely. Making the animal believe its movement is necessary so as to study its mental map, spatial cognition, and navigation.

According to the researchers, the animals reacted similar to the virtual reality as they would to the real time objects. The animals used in the study were fruit flies, zebra fish, and mice. In one of the experiments, the illusion was created such that one end was higher than the other and the mice reacted to the illusion depth by staying at the lower end. Similarly, the zebra fish were also put to test where they were exposed to a virtual swarm of aliens. These fishes reacted to the aliens by either mimicking to join the swarm or bring about other behavioral changes. All these studies helped understand the human and animal perception. The similarity in the brain architecture of the mammals and humans has resulted in using the animal models in the labs for the experimental purposes. Additionally, the researchers have thought about bringing Holodeck to reality so as to carry out a number of experiments.