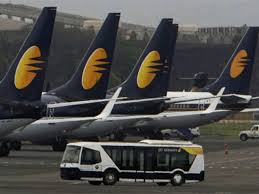 On Wednesday, Embattled Airways said that they had stopped operations of flights when the lenders did not accept its application of emergency funds. The amount of rejected fund was $58 million. The carrier that got stuck in bank debt of $1.2 billion was teetering since weeks because of the failure of receiving the loan of $217 million by the lenders, in accordance with the rescue deal done in the last of March.

On late Wednesday, through a statement, jet airways said that they have no choice apart from suspending the temporary flight operations.

In its best conditions, the Jet operated on daily 600 flights and 120 planes. In past weeks, due to the ending of the fund, the jet airlines which have an average number of 16,000 employees were forced to stop the flights at foreign destinations and around 100 flights were canceled.

In the past months, the pressure over airlines was increased by hefty taxes on fuels, high prices of oil and weak position of rupee in the global currency market. Apart from these situations, the rising competition from companies spice jet and indigo were reasons for rising pressure over Jet Airways.

On Wednesday, a thankful gesture was shown by airlines towards its customers who supported, sponsored and stayed loyal with the company for 25 years of time. Airlines said that they are sincerely apologizing to the guests who experienced problems while traveling.

The airlines said that they are still willing to work with lenders that are finding investors who can buy a maximum stake in airlines and are able to change them also.

Jet Airways is hoping that they will resume their flights soon and assured that they will continue the support given to bid process which is initiated by banks.

In one of its statement, Jet Airways said that they were informed at late night of Tuesday that their emergency funds have stopped.

Airlines added that due to cancellation of fund application, they are not able to do payments of emergency services and fuels.