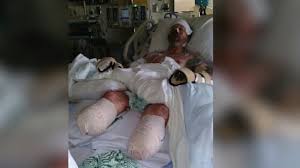 Marie Trainer had just got back home from her vacation in Punta Cana. Unfortunately, she had to miss work again due to nausea and severe backache. This was followed by constant high and low temperature in her body. Finally, she was admitted at the emergency room in Ohio on May 11, 2019. She hardly knew that when she would wake up next after nine days, it would be with amputated legs and hands. Doctors took almost a week to understand that Trainer had been infected not from a typical disease from her travel but from the kisses of her German shepherd.

Trainer had been infected with rare bacteria named capnocytophaga canimorsus which she got from her puppy of the German shepherd breed when the animal had licked an open cut. Trainer was treated by Dr. Margaret Kobe at Ohio’s Aultman Hospital. Trainer had high fever when she was taken to ICU. In fact, soon she became unconscious. Her skin also quickly started changing color to purplish-red tone and then developed into gangrene. Trainer later had a blood clot. Kobe said that it was really hard to understand the reason at first and they ran a series of test to finally find out the disease.

The infection had spread rapidly to her ears, face, legs and even the tip of her nose. She was lucky to not lose parts of her face. However, amputation was important for her legs and hands. The family wanted to save Trainer’s limbs. Sadly, the doctors couldn’t take the risk and suggested that damage has already been made. Blood test and culture reports were positive that she had capnocytophaga. Gina, Trainer’s step-daughter said that it was indeed hard for them to accept that she was fine few days back and suddenly she would have to spend the rest of her life without any adventure like travel.