The arrival of every technology comes with loads of misconceptions, of which a majority of those are baseless. Innovations are first overseen from the negative perspective until and unless it doesn’t show the real effects and benefits.

It was the same case when there was an initiative carried out for the autonomous subway and monorails. These modes of transportation might be taken for granted nowadays. However, at the launching period, it had to face various questions associated with safety. One of the queries was: Can the driverless subway trains commute the passenger with the same efficiency and reliability? 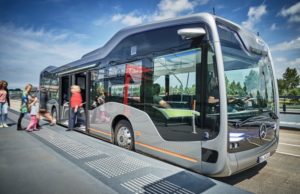 Navya, a French autonomous vehicle manufacturer, declared its plans to develop an autonomous bus, Arma in the U.S. at Michigan. The plant is projected to manufacture 150 autonomous buses by 2018. The Arma has a seating capacity of the 15-passengers, powered by the battery, and can achieve a top speed of 28 MpH. The bus is integrated with various smart sensors that scan and create a 3-D map of the nearby surrounding. The Arma bus is also equipped with a technology that can identify the traffic signs and pedestrian technology.

The bus is specifically designed for the areas that are too congested for large size buses. The university campuses and other such locations that are utilized for a sole purpose can be a perfect location for such shuttle buses. At the present stage, the Arma Shuttle is testing its efficiency at the University of Michigan, which has an inbuilt autonomous car city known as Mcity. This city is constructed with controlled traffic environment specifically for autonomous vehicle testing.

The company has been testing the Arma bus at multiple locations in France, particularly in Paris, which has great pedestrian spaces. The bus is also testing its capabilities at the U.K.’s Heathrow airport, which is the perfect location to test such self-driving shuttles. The routes at the airport are fixed and predefined, which makes them ideal for the initial introduction of autonomous buses. A majority of the airport facilities and institution operate their own road system and these routes give autonomous vehicle developers a real-world environment that has well-controlled surrounding and low-speed tracks.