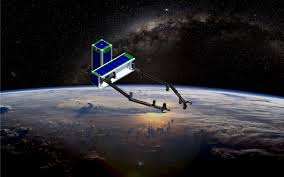 The richest man in the world, Jeff Bezos has entered the space race with the start of his own company, the Blue Origin. While SpaceX and Elon Musk always manage to grab the attention because of the real work in progress in space, Blue Origin has been working on the development of few launch vehicles and space hardware which includes a lunar landing system.

The Blue Moon was unveiled recently which unlike the Apollo LEM appears to be a platform for multipurpose landing missions. The lander looks like the descent stage of Apollo LEM after getting a growth spurt and being accessorized. The Blue Moon lander is capable of landing more than 14,000 pounds of payload on the moon and the cargo can be distributed in various compartments. It has special cranes that can lower the cargo and rovers from the upper deck to the surface. The primary engine on the lander is a liquid-oxygen and liquid-hydrogen fueled re-startable, a throttleable engine called BE-& that makes over 10,000 pounds of thrust which is similar to the descent stage engine of Apollo lander.

A crewed version as well as addition on the cargo deck, which on the upper side, of the pressurized ascent stage much like the Apollo LEM has been planned for the Blue Moon. Bezos has suggested that the landing pads on the Apollo were oversized as nobody knew the density of the lunar surface but now based on the gathered knowledge, the Blue Moon has smaller landing pads. The precise plans for the lander to travel to the moon have not been shared yet but according to the suggestion from Bezos, the goal is for the Blue Moon to reach the lunar surface by the end of 2024.