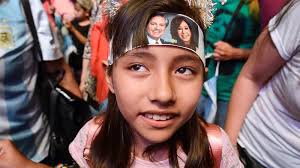 The voters of Argentina, the second-largest country in South America, will be heading to ballot box this Sunday. It is expected by most that Mauricio Macri, the President of Argentina will be defeated by Alberto Fernandez, opposition ticket of the center-left and Cristina Fernandez de Kirchner, the populist ex-leader.

The presidential elections’ first round comes amidst a debt crunch and the stock markets have been worse over the last decades. The latest of the opinion polls have indicated that the center-right incumbent will be bet by Fernandez by nearly 20% percentage this Sunday and this would be enough for winning the presidency. According to Argentina law to win the first round of Presidential election, candidate must have 45% of votes and 10% points of margin of victory over the nearest rival. The senior economist for Latin America at the Oxford Economics, Carlos de Sousa said that even if Macri goes to the second round it will be very difficult for him to have a win in the elections. The economy has worsened and people are getting angry and Macri is being blamed for all this.

In the early August, the results produced by the primary were a clear indication that people were fed up of the austere policies of the ruling government. Fernandez had received 47.8% in the voting while Macri had only 31.8% on the 11 of August. This has made the chances of the president going to the second round a doubtful one. The center-right president had come to power before 4 years and promised that the endless economic crisis of the country would come to an end with his business-friendly leadership and pro-market reforms. However the present condition is worse than what it was when he came to power.

The inflation in the country is at 55%, the country is in deep recession and payments of local as well as foreign debts of nearly $100 million has been delayed. Analysts have told to CNBC that the focus now will be on how the next president deals with IMF as well as other creditors.