The technological adoption in the medical field is currently on a rise in every country. Hence, there is a huge increase in the development of innovative products or techniques related to science. The researchers from all across the globe are taking huge steps to reach their goal of improvising the methods or products used in the field of science. 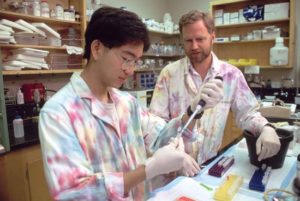 Lately, a group of researchers in Portland have successfully carried out the gene editing process on the human embryos for the first time in the U.S. This success is surely going to open new doors of positive opportunity for the medical field. The lead researcher Shoukhrat Mitalipov and his team are the brainchildren behind such an amazing discovery. The basic idea behind it was to bring about corrections in the defective genes that are regarded as the cause of inherited diseases by using the CRISPR technique. Till date, this will be the first of its kind in the human history that the gene editing has been carried out in the human embryo.

The edition in the DNA code of the embryos by editing or correcting the genes that leads to inherited diseases including beta-thalassemia, fatal blood disease, and others. This process of modifying the embryo by eliminating inheritable disease is known as germline engineering. The child born from the genetically modified embryos will pass on the changed genes to its offsprings and bring about a halt in the inheritable disease.

The rules and regulations regarding bringing about changes or developing human-like genes (cloned form) are very strictly followed not only in the U.S. but in rest of the world as well. It is only in China that the human gene editing is being carried out for a while now. The concern regarding the development of cloned babies or designer babies using the advanced genetic engineering techniques has led to the biotech companies, religious organizations, and civil society groups coming with stringent laws.

The Mitalipov’s study will not be known as the edited embryos were not permitted to grow more than a few days. The CRISPR technique was used to bring about editing without causing the occurrence of mosaicism. These embryos were not even let to be implanted. The earlier experiments carried out on the embryos had proved unsuccessful as the changes were not accepted by all the embryos. In Mitalipov’s study, the eggs were injected a CRISPR segment to eliminate the unwanted genes followed by the addition of sperm cells as well.

This revising human genome procedure is kind of a golden opportunity for the researchers or medical professionals to help curb the inheritable disease rate.