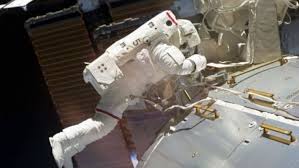 The work of upgrading the power batteries at the International Space Station (ISS) has started. Nick Hague and Christina Koch, who are the astronauts from NASA did their first walk on ISS to accomplish the task. The duo took a walk for almost 6 hours and 45 minutes to get the job done. In the process, the nickel hydrogen batteries were replaced with advanced lithium ion batteries. The change was made at the P4 truss, which is also the solar array for ISS. These batteries preserve solar energy which comes out from the solar arrays. When ISS is not exposed to sunlight, these batteries provide the required charge to operate.

A similar walk was conducted on 22nd March of this year. This walk was taken by Nick Hague and Anne McClain. They changed 6 nickel hydrogen batteries and placed 3 lithium ion batteries. The change was made at a different channel of the P4 truss of the spacecraft.

While the initial plan was to keep all the walks similar, NASA had to change it a bit. Just after installation last week, one of the lithium ion batteries stopped working. For this reason, right after the astronauts completed the space, the ground controllers of NASA Johnson Space Center tested the newly installed batteries.

The NASA experts explained the fault found in the previous battery. They informed there was more voltage in these batteries than what was expected. According to Branelle Rodriguez, who is the evaluation manager for the space station, the exact cause for this error is yet to be identified. In case the battery is no more functional, it will be replaced with the old nickel hydrogen batteries. Hague and his collage Koch have started the process for this change but the replacement work will be mainly done via robots.