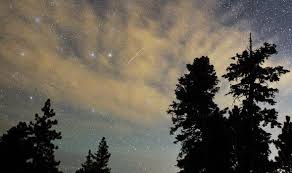 One of the biggest questions still remains that how can one accurately spot shooting stars? One thing is for sure, you definitely don’t go looking for the star to have eight legs. However, a camera has been designed by NASA to capture photographs of meteors. This particular device spotted a lot more than anybody could have expected during the meteor shower of Perseid, when a straight spider decided to pay a visit. The snapshot was taken on August 5, 2019 at Tucson, Arizona’s SkyCenter of Mt. Lemmon.

NASA has a network comprising 17 all-sky types of cameras. They capture black-and-white photographs of the whole sky with the use of fish-eye lenses. These cameras are specifically designed for spotting fireballs or meteors that gain entry into the atmosphere of the Earth with shines brighter than Venus.

Cameras scanning the entire sky regularly capture critters which are far more terrestrial as compared to meteors. Before this, NASA has published images of an owl, a bug as well as a tiny bird passing by such a camera. This recent episode of a spider visit is not the first arachnid encounter for NASA. In fact, back in 2007, a fatter spider crawled up onto a camera positioned to observe the Atlantis space shuttle’s launch.

The meteor shower of Perseid is traditionally and typically the most favorable one of each year. However, this year saw the streakers become a little difficult to spot against the waxing moon’s glow. August 12 is the peak time for Perseids when skywatchers can spot nearly 10-15 meteors every hour. This shower of meteors continues throughout the month, up until August 24. This phenomenon of Perseids occurs as the Earth plows via the debris around the Swift-Tuttle Comet. This time around, it was a spider that decided to play the photo bomber by being perched right in front of the camera during the meteor sightings.