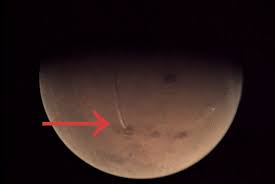 A study that was printed last year in the Science journal had suggested that liquid water may be present underneath the polar ice caps in the southern half of Mars. However, a counter opinion has been offered by a study recently published in AGU journal. It puts forth the opinion that an underground heat source needs to exist for there to be an existence of liquid water beneath polar ice caps.

This new research has been put together from an unbiased perspective in the sense that it does not look to confirm or deny the existence of liquid water. Instead, the suggestion of the authors is that the recent magmatic activities, or in other word, magma chambers that may have been possibly formed in the span of the previous several hundred thousand years, could plausibly have been formed beneath the Mars’s surface. This may be the root cause for there being enough heat for the production of liquid water beneath the ice cap that is nearly 1.5 kilometers thick.

On the other hand, the authors of the study have argued that had there not been any magmatic activity in the recent past underneath the Mars surface, then chances of liquid water being found beneath the surface of the planet are very low. According to Michael Sori, they are extremely interested to observe the community’s reaction to this report as they expect different people to have different opinions regarding this issue. Sori is staff scientist at the associate level in the Planetary and Lunar Laboratory of University of Arizona, and has also co-authored this new paper.

This potential presence of magmatic activity underneath the planet’s surface in the recent past has given more significance to the existing idea of Mars being a geologically active planet. This fact can help scientists get a clearer understanding as to how planets have evolved and continue to do so over time.