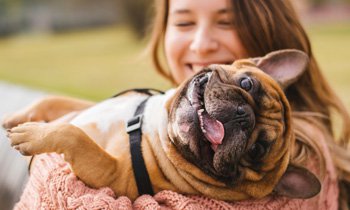 A new study has revealed that interaction with pets has a significant effect on the levels of cortisol in college students. Cortisol is a stress hormone, which secretes more under stress. Though it is no secret that spending time with pets significantly lowers the stress level and improves the mood, the study has concluded that people with mental health issues have benefitted hugely emotionally as well as psychologically, after mixing with their pets.

Research now concludes that mixing with pets should be a part of treatment and care plans for the patients. This is because it has been proved that pets contribute immensely to the improvement of mental health and well being of the patients.  The latest research has further given credibility to those claims.

Jaymie L. Vandagriff and Associate Professor Patricia Pendry of Washington State University Human Development Department in Pullman conducted a study to ascertain the impact of pets on the psychology of the college students. They appointed 249 students and split them into 4 groups.

The members of the first group were sent to interact with dogs and cats for 10 minutes while the second group waited for their turn, and watched the first group playing and stroking the animals. The third group was shown some slides of cats and dogs, while the fourth group simply waited silently, without any activity related to the animals.

The saliva samples of each of the participants were collected just after the session and the morning after, and the cortisol levels were determined. It was found that the group that interacted with the animals directly had a marked decrease in the level of Cortisol just after the session compared to the morning after. The one who watched the slide show or the group that waited had a varied level compared to the next morning reading. However, the group that did not interact at all, physically or visibly, did not show any change in the cortisol level in the two readings.