Infosys, the second largest IT company of India, this week claimed that its search for the upcoming Chief Executive Officer is making a great headway. The Bengaluru-located firm has kept a cut-off date of March 2018 to fill the leading vacancy after the unexpected resignation of Vishal Sikka, the previous CEO, in August following a wave of blames pertaining to management problems by N R Narayana Murthy, the co-founder of the company. Infosys has added in Egon Zehnder, the executive search firm, to help in worldwide search for the substitute. U B Pravin Rao was dubbed as Managing Director and interim CEO of the firm on August 18, 2017. 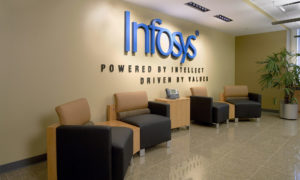 “The procedure of recognizing the subsequent CEO and stakeholder consultation outreach have been started and are making great headway,” Infosys claimed to the media in a statement declaring quarter two earnings of the present fiscal year. The firm had earlier claimed that it will cast a broad net in the search of CEO, and the chase might include Infosys alumni along with external and internal members. On August 25, 2017, within hours of claiming charge as non-executive Chairman of Infosys, Nandan Nilekani had informed sponsors that the firm had an open mind on the worldwide search.

“The aim is to find someone who has the know-how in controlling a worldwide corporation, who can pace the implementation of our policy, and has sturdy admiration of the cultural alteration that is needed,” Nilekani had claimed to the media in an interview. Nilekani had also emphasized then that the members might require to have sturdy technology ability and the capability of strengthening and building relationships with all shareholders. There have been reports that administrators such as CFO Ranganath D Mavinakere, BFSI head Mohit Joshi, and interim CEO Pravin Rao are amid the possible candidates for the role.

With Infosys aiming at alumni members as well, other likely nominees might also comprise names such as Mohandas Pai (previous HR Head and CFO), V Balakrishnan (ex-CFO), B G Srinivas (previous President), and Ashok Vemuri (previous Board member and America Head). Well, let us see who will be the right choice for the role.