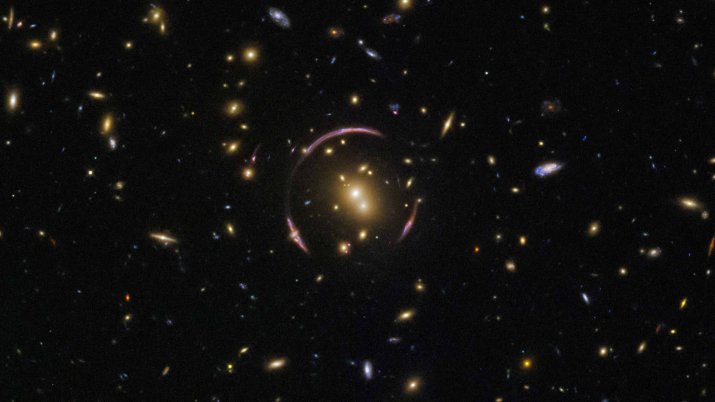 SDSSJ0146-0929, the galaxy cluster, is unequivocally massive, with so many galaxies in close vicinity and held in gravitational pulls of each other. In reality, the collective bulk of these galaxies are so excessive that it leads something uncommon to take place.

When an image of this far-away cluster was snapped by the Hubble Space Telescope, the quantity of mass space-time resulted in such an alteration in space-time that a strange ring was observed at the middle of the cluster, which is known as gravitational lensing, or an “Einstein ring.”

Gravitational lensing has its origins in general relativity; however, the fundamental notion of what is taking place is just easy to describe: when light travels through a very thick entity with a massive gravitational pull, that entity can, in point of fact, disorder the route taken by the light. What we observe is light being enforced to move around the galaxy cluster as the distorted space-time of the cluster thwarts the light from traveling in a straight route.

And when that comes about, it can seem to the outside viewers (which, in this case, would be you) that a galaxy is in numerous locations at the same time and the brink of the Einstein ring does look like several extended copies of one galaxy. Actually, that galaxy is not in numerous locations at the same time, obviously, but it is altering light sufficiently that we cannot perceive it normally.

We have observed gravitational lensing several times beforehand, and this is essentially one of the less striking occurrences. Other Einstein rings can be much more nerve-wracking, similar to the one we have discovered that imprecisely looks like the Sauron’s Eye from the Lord of the Rings.

Prior to this, the Hubble Space Telescope had discovered a huge blue star named “Icarus,” the furthest away discrete star ever observed.